Thank you for your support! We raised £3405 for Syrians in need

Dear friends and supporters of Stories and Songs for Syrians,

Thank you so much for your generous donation to our fundraising appeal for Hands Up Foundation's urgent humanitarian and medical support to Syrian victims of war.

We’re delighted to announce that we raised £3504 between our 8-week online fundraiser and the weekend of Stories and Songs for Syrians events with Nadine Kaadan and Babel Babies. Over 120 people from several countries gave donations and got involved with the project, which is just amazing.

We have so many people to thank: The Suffolk Anthology Bookshop, Cheltenham, and The Friendship Café, Gloucester for hosting our Stories + Songs for Syrians events in February, and writer and illustrator Nadine Kaadan, and Cate Hamilton of Babel Babies for entertaining us, and for donating CDs and books. Baker & Graze café in Cheltenham for the tray of delicious rose and pistachio donuts and Rowena for the cat biscuits! Sheila Hoeman, Saqi Books, Penguin Random House and Lantana Publishing for donating books, and Zaytoun for donating dates, as rewards for pledges (we hope they have arrived safely in the post to those who requested a gift. We have a couple more to send out, but mostly they should have arrived by now!). Kareem for offering to cover the postage of said gifts, and Caroline, Gemma, Pleuni, Vera, Hilary and everyone else who helped out at the events and gave lifts to the Syrian families. The Gloucestershire Echo for publicising the events and the fundraising appeal, Roma Widger of Bristol Community FM for coming to interview Nadine and Cate and BBC Bristol for featuring it as part of weekly best-of programme! Journalist Marcia Lynx Qualey for championing the project at every possible venue, including in Germany’s Qantara magazine and on Bookriot.com (see below).

And thank you, you guys, for donating your hard earned cash to help Syrian victims of war.

George, Louisa, Johnnie & Rose of The Hands Up Foundation sent out some incredible news this week: so far, Singing For Syrians projects have raised £105,500 to send to aid projects to help Syrians in need. But it’s not over! Sadly, Syria and the people caught in the crisis still need our help, and Singing for Syrians events are continuing across the UK in 2017. If you would like to hold an event, you can register early for your free pack on the website www.singingforsyrians.com. If you’re involved in a choir or music group, please do consider holding your own Singing for Syrians event to raise money for Syrian refugees and displaced people in need. And do get in touch if you’re interested in running an event for kids and would like some advice on how to go about it. 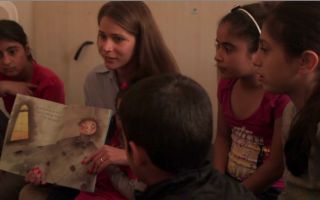