Thanks for supporting Catacombs of Terror!

This is the first time Tangent has done a crowdfunding project, though we've supported many, and it's proved an interesting exercise. I'll be posting regular updates over the next 19 days, I'll keep them reasonably brief and try to make them interesting.

We decided to do the crowdfunding campaign with Fundsurfer because they are local - they are based at Temple Meads and about a 20-minute walk from the Tangent office at Paintworks. Fundsurfer seem to offer all of the benefits of the big crowdfunding organisations, but there's a lot of personal support from Ollie and Derek. Using Fundsurfer is very much a case of 'Think globally, act locally'.

A quick word about the campaign. We set it up before the Glastonbury Festival because various key people where down at Pilton and we knew it might take a while to get things moving afterwards. So, with this in mind, it's quite a long campaign and it also accommodates various people being on holiday. We've hit 10 per cent funding and a good number of backers in roughly the time that would suggest that we'lll get very near our target, so eveything is positive.

But this is where you come in. For any crowdfunding campaign to be successful,the backers need to play as active a part as possible by sharing and promoting the project. So please share FB and Twitter posts and tell people about the campain. Please share the video and the link to the Fundsurfer page.

That's it for now. In the next post, I'll be looking at the politics of crowdfunding and how it can be used as a model for promoting radical and independent publishing. As I said earlier, this is new territory for Tangent/Scratter & Pomace so I'd be interested in your thoughts and comments. 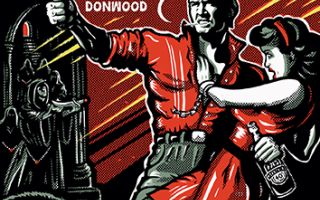