A New Year Message from George

We are now just three and a half months away from the mayoral election on 5th May. I would like to start by giving grateful thanks to everyone who has helped and supported me, both as mayor and now as mayoral candidate. Without you Bristol 1st would have no chance of success.

The last three years have flown by. The way Bristol is governed and managed has changed dramatically. We have demonstrated that independent leadership can be very effective – and refreshing. It certainly seems to have stimulated interest and debate in local government!

In Bristol, political allegiance does not define how decisions are made. From the beginning, I was committed to ensuring that every community in the city was represented at the top table. That is why I set up a rainbow cabinet that included all four political parties on the Council. I am now standing for a second term because we need longer than three and a half years to achieve the vision that I set out in my original manifesto.

I promised that I would tackle the most crucial issue that came up at the last election – transport. I knew it was going to be a tough nut to crack in such a high car use city. In all the time that I have lived in Bristol there has been an ongoing conversation about how transport can be improved, but all plans seemed to hit the dust. In comparison, we have come a long way.

As soon as I was elected, I came to the conclusion that the strategy had to be to invest in better public transport infrastructure while limiting the number of commuter cars. Implementing residential parking zones had stalled under previous administrations and faced strong opposition. Despite reports, I did listen and adapted the plans through consultation with those affected. Acceptance levels have soared and there are now calls for new parking zones from neighbouring areas.

In the face of concerted opposition from the main political parties and surrounding authorities, I improved the Metrobus route to avoid the harbour and Prince Street bridge. This was the best option available. Any further delay would have cost the city millions and delayed £400 million of transport infrastructure investment. Metrobus will be completed by end of 2017, and will be followed by £200 million investment in the Metrorail suburban railway system between now and 2020.

The previous administration introduced 20mph, which I have supported by rolling it out across the city's residential areas. I am determined to make our streets safer and to civilise our residential areas. I don't expect everyone to agree, but it upsets me when some people choose to play politics with this life saving measure - one that is being emulated by many other cities across the UK for the very good reason that it works.

If we are going to achieve our aim of being one of the world's most liveable cities we need transport that is cheaper and environmentally efficient. We owe our children a healthy future and I am not prepared to put up with the poor air quality we have now in 10 or 20 years time. We are beginning to clean up our act with the introduction of lower fares and more efficient buses by First (the cleanest in the UK) and many other innovations. I hope to make further announcements on this before the election. When we reach 2020 transport in Bristol will be transformed. Unfortunately, there will be a certain amount of disruption in getting there, and some of it will be in the lead up to the election!

Economically, our city continues to boom. Bristol has a great history of innovation, creativity and a start-up sector that every city outside London would envy. However, if we are to have a resilient society, a culture of business growth has to be matched by greater social mobility. Sadly, we live in a time when central government is removing billions from our welfare system and from local authority budgets. This means we have less money for the most vulnerable in our society and we have to be extremely creative in the way we redress the balance to ensure that everyone can benefit from Bristol's success. We are doing better than most authorities in mitigating the cuts. We have one of the largest hardship funds, including Council Tax reduction measures, in the UK. I am proud of the growth here but it remains a necessity to address inequality in what is a relatively wealthy city.

Things really did change for Bristol in November 2012. We went from an ever-changing council that seemed to put party politics before a duty to the city, to a leader with a direct mandate to deliver in the best long-term interests of Bristol. That is why I became Mayor. My passion for this city is transparent. I have lived in Bristol for 50 years and consider myself as Bristolian as anyone with the good fortune to be born here!

I know that you all share my commitment to do the best for Bristol and want the kind of changes we have achieved together to endure and continue. I will need your support to win this next election. Our resources are hugely outweighed by the resources and members of the political parties who are also standing for election. I relish the challenge but hope that you can contribute your time and also introduce others to help from now until May. We need to continue to show that Bristol does things differently and that independent leadership results in real progress. 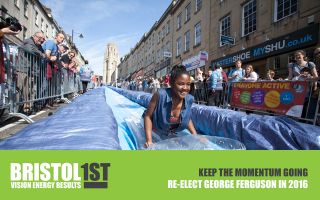