On our way to paradise again

After a businesstrip to Bangkok, the team will meat again in Colombo Sri Lanka on May 15th.

Mission: introducing the concept of converting polluting threewheelers into electric to the president of Sri Lanka.

It took us two years to get to this point, but finally we can show the concept to the Sri Lankan government: the most polluting vehicles (two stroke threewheeler taxi's) will get a new electric engine and a battery-pack. On top of that, the brakes, lights and other vital parts will be modified to 21st century standards. Ths will result in better air quality and general road safety on the streets of Colombo. The example can be multiplied all over Asia and other countries with air quality issues. Ultimately, it will not only result into fresh air in Colombo, but also into lower carbon dioxide emission: by changing from oil to electric power for transort, we allow renewable energy like solar- and wind power to gain territory. This results into less consumption of fossile fuels, witch will lead to a stop of global warming.

Sri Lanka is our starting point, we like to refer to it as the gateway to Asia. And if Asia no longer breathes out greehouse gasses, the rest of the world will benefit.

Our grandkids will have questions: "Why did y'all take out aal of our feedstock? And why is the sea level so F...... High?

Join the mission, become a soldier for the next generation! 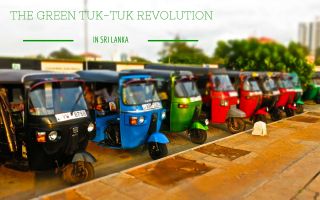 The first step to Eco Paradise Sri Lanka: you can't miss it when you visit Colombo: the threewheeler. Help us to convert 200.000 of them to electric.