It’s been a while since we finished the fundraiser and we are now in the position where we have made a decision as to how the £40k raised, would best be spent.

This decision has been made in consultation with a number of people; those on the ground, those really informed as to what is going on, and Help Refugees, our charity partner.

When we first thought about how we could help the refugee crisis, our thoughts were focused on building shelters in Calais. Prior to the campaign being launched the situation in Calais changed dramatically, with the French government bulldozing large sections of the camp and moving refugees into new purpose built containers. So we shifted focus to Dunkirk, but since finishing the campaign, the situation has changed there too and the French government are being very controlling about any new shelter building.

The future of these French camps looks very uncertain. Therefore, we have decided that it’s too big a risk to the money that you have helped to raise, and the impact that money can have on those in need, to build shelters in France.

As you all know the refugee crisis is a deeply connected one. People are on a long journey, escaping wars and inhumane regimes; Calais and Dunkirk have been the final resting points for many hoping for a better life in the UK, but there are many pressure points along the way. Greece is one such place where there are an estimated 50,000 refugees, with 40% children and 25% women, many living in military camps in horrific conditions. This is where we have decided to concentrate our efforts.

The aim of the project is to provide shade and community spaces for refugees living in military camps in Greece.

The output of the project will be increased access to shade and respite from the hot sun, and a space for communities to gather and conduct activities.

The temperature in Greece is rising up to 45°C at the height of the day and the majority of the military camps offer no shade and are located in isolated industrial areas or on mountainous terrain. With a serious lack of items such as sun cream and sun hats to distribute, and no spaces besides crowded tents to seek cover from the blaring sun, refugees particularly children, have blistering sun burn. Medical care is infrequent and so quite often the severe sun burn that children are getting can cause open wounds that get infected and cannot be treated.

As well as the physical and health problems that come with having no access to shade, it also presents little for children to do in the unbearable heat all day. Some children living in the refugee camps in Greece have not been to school for years during their perilous journeys, and are now stuck in the camps awaiting their asylum claims to be processed. With no child friendly space under shade, these children cannot have a childhood and a safe place to play games and learn, catching up on the years already lost.

A lack of community spaces in the camps also correlates to an increase in tensions among the community living in such close quarters. A space that the community can use, to make and drink chai, have community meetings and gather separate from the bleak warehouses that people are often living in will hugely increase the atmosphere in the camps. 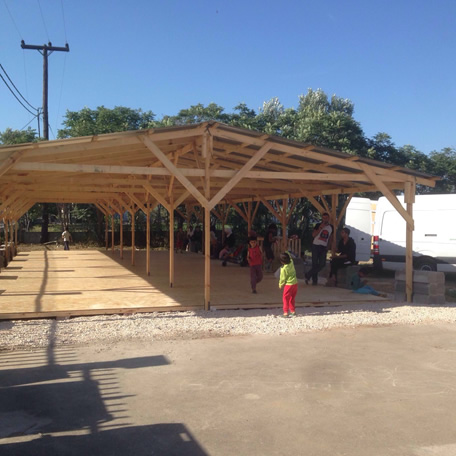 In Greece, Help Refugees have been installing shaded areas in 6 of the military camps with the group Green Helmets. So far, the spaces have been adopted by the community, turned into schools where teachers from the refugee community can teach the children. They are used in the afternoon as a space to drink chai, and in the evenings to watch movies provided by volunteer groups. Our teams have noticed a significant increase in community spirit, engagement and wellbeing levels.

Help Refugees will build shaded areas in 4 more camps in Thessaloniki. These would provide a safe space for approximately 5,500 people, of which 40% are vulnerable children.

Help Refugees will then work with volunteer groups in the camps to ensure that the community are able to develop programmes for the spaces, so that people are able to use their time waiting for their asylum claims to process in a productive way.

There are currently no groups building community spaces and offering any respite from the shade. The Ministry of Migration in Greece is over-capacity and does not have any further resources to make the camps liveable and safe.

Help Refugees will do all that we can to ensure that refugees are able to have access to safe sanctuaries and shelter until they reach their final destination. 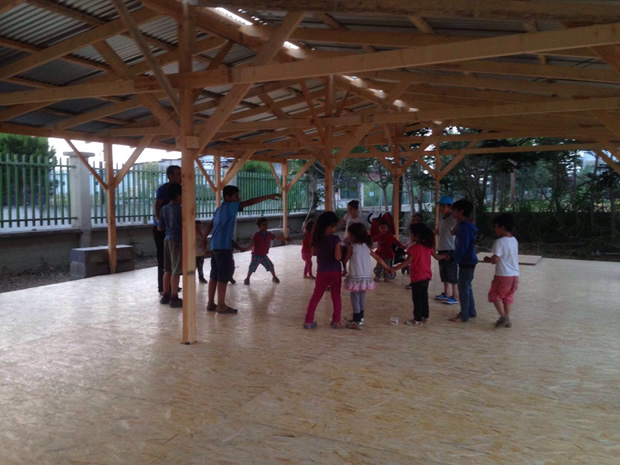 I’m sure you will agree that this is a tremendously important project. We carefully considered all the options and are really happy that the money we raised with your help, will make a huge difference.

If you have any questions or would like more information about the project, please just let me know.

The work will be starting immediately and we will share further updates with you as the project progresses.

Thanks again for making this happen. Without your support this simply wouldn’t have be possible. We are forever grateful for your generosity and warmth and for joining us and our wider community in doing something to make a difference. 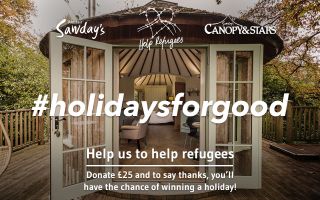 Donate £25 and to say thanks, you’ll have the chance of winning a holiday! Win four Canopy & Stars and Sawday's holidays, plus 70 runner-up holidays