Keen observers will have noticed that I gave this project a big push a few weeks ago and then it all went quiet.

As soon as it launched it quickly gained support and within days we had pledges totalling £1400. The campaign was doing what I wanted which was prove that there was demand for the product and support for my vision of how to achieve it. I emailed the Harbour Master to make him aware of the crowd funding campaign and that's when progress came to a hault.

In essence, his response said that he is not prepared to discuss licensing with me until I purchase the boat. My stance is that I am not prepared to risk purchasing the boat until licensing has been discussed and I have some indication that permission is likely to be granted. And in that we've reached stalemate.

He describes my project as a "hotel" and explains that getting permission is "a case of the Harbour Authority and Bristol City Councils mooring policy and planning if this can go ahead". As soon as I hear someone in a position of authority using words like "Planning" and "Hotel" to describe an idea that needs to go through 3 authoritative bodies it just feels like I'm being set up to fail. Would you gamble your life savings on an application being granted for "a new hotel on Bristol Harbour"?

So here we are, watching the young flames of an idea fizzle out so soon, suffocated by bureaucracy.  The only hope for Svanskar becoming an eco-glamping experience now would be for somebody who can afford to lose £30,000 stealing the idea and executing it themselves at the risk of permission being denied. Except that's not going to happen because the kind of people who can afford to lose £30k are not the kind of people willing to spend 6 months sawing, sanding, screwing and painting for no money, they are the kind of people who pay other people to do that, and if you are paying wages you need to cover that cost and you want the end product to be a profitable, scalable business, not a one-off historic vessel.

This idea was only ever viable in conjunction with my current personal search for a big life project. I'm bored of my recent career in the web industry and keen to re-ignite my craft skills to create something amazing. Converting Svankar was going to be my Grand Design but Bristol's not ready for it.

Thank you to those who pledged support, I'm sorry I couldn't make it happen. I will keep searching for my big project. 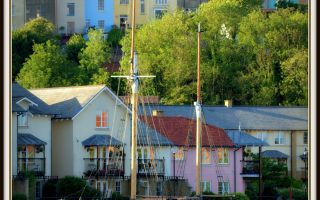 Stay on board a beautiful oak-timber sailing vessel, moored in the heart of Bristol City. Pre-order a night aboard to fund conversion.