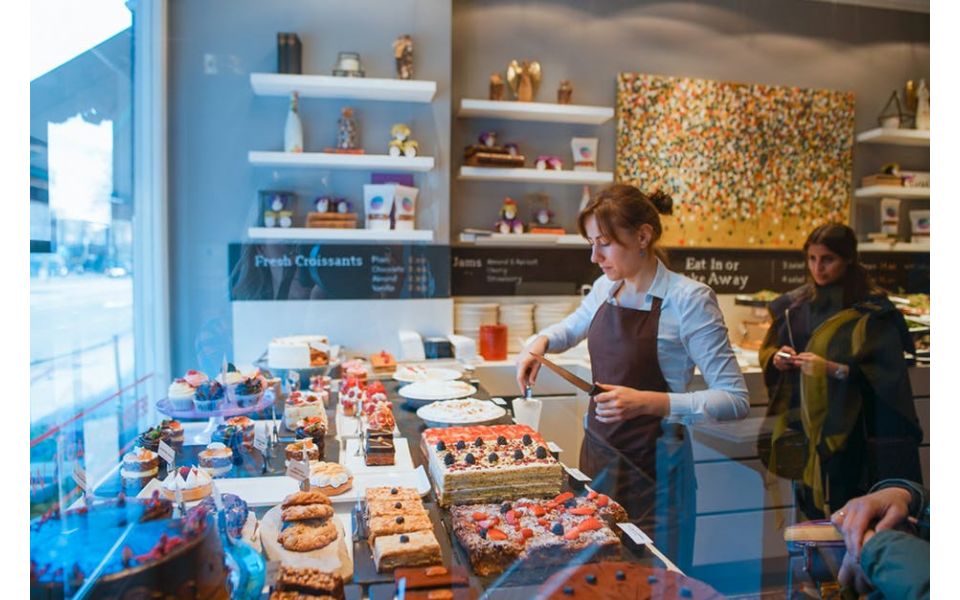 Putting banking back in the hands of the people

Putting banking back in the hands of the people: The role of regional cooperative banks in community wealth building

If you’re in any way a follower of the ‘new economics’ movement you will probably have heard of the ‘community wealth building’ mantra which is gaining ground as common language. So, what exactly is this new approach to growing local economies?

If you’re in any way a follower of the ‘new economics’ movement you will probably have heard of the ‘community wealth building’ mantra which is gaining ground as common language. So, what exactly is this new approach to growing local economies?

The Democracy Collaborative, where I’m a Next System Project Research Fellow, defines community wealth building as a broad range of models and innovations such as co-ops, community development finance initiatives (CDFIs) and community banks that “aim at improving the ability of communities and individuals to increase asset ownership, anchor jobs locally by broadening ownership over capital, help achieve key environmental goals, expand the provision of public services and ensure local economic stability”.

One key way to achieve this  is to stop money leaking out of communities by leveraging public procurement and investment through ‘anchor institutions’ like local authorities, universities and hospitals. Another important shift is towards regionalising and localising financial flows and keeping money in communities through initiatives such as local currencies and community banks.

While this approach emerged in the US with work by the Democracy Collaborative leading to   the pioneering ‘Cleveland model’, which is now inspiring numerous other US cities, this is now rapidly catching on in the UK. Democracy Collaborative UK Fellow, Matthew Brown, has been leading the way with his work on the ‘Preston model’ which emerged in 2011, and has led to the city being named the best place to live and work in the North Westand most improved city in the UK. These are encouraging signs for other cash strapped councils looking for a new way of doing things.

Preston along with other local authorities such as Bristol, Liverpool and Croydon are now part of the UK Cooperative Councils Innovation Network, a new network which, along with organisations like CLES, Stir to Action, Nef and Co-operatives UK, is spearheading the championing of cooperative values and models in communities across the UK.

This movement is allied, and hopefully will link more and more, to other democratizing citizen-led movements such as the Fearless Cities movement originated by the Barcelona en Comú citizen platform and the emerging peer2peer City as Commons work in places like Ghent.

Whilst many of the above are relatively new movements, there is a long and proud tradition of cooperative and community wealth based work in places like the Emilia Romagna Social Economy, Quebec Social Economy and the Mondragon complex. As John Restakis and Mike Lewis show in their Next System Project essays, in many of these places the majority of public services such as care and education and many products and other services, are delivered neither by the state nor by private capital but instead by citizens, community businesses and civic associations in close partnership with local government.

As the investment function in national and local economies is so key and influences the character of the rest of the economy, one crucial player in the institutional landscape of all successful examples of community wealth building is a community bank, which along with other CDFIs, plays an important role in shifting power away from capital, to citizens. For example, the founding of Caja Laboral bank in Spain was key to the emergence and growth of what is now Mondragon, a co-op with $12bn revenues and 75,000 employee owners.

An important new player in the community wealth building landscape in the UK, and one which is following in the footsteps of examples across North America like Desjardins and VanCity and the hundreds of similar enterprises across the EU, is the Community Savings Bank Association (CSBA) which is launching 18 regional cooperatively owned banks across the UK.

In Germany, Sweden, Denmark, Italy, Spain and France a host of community and state-owned banks like the Landesbanks, JAK Bank and agricultural co-operative banks all serve such needs and make up as much as 64% of the banking market. Regional banks have been absent in the UK since the last ones, including the original Trustee Savings Banks, were swallowed up by large clearing banks in the 1980s. Furthermore, there have never been true cooperative banks in the UK - until now. The law was changed in 2014 and it is now possible to gain a full deposit taking bank license in the UK as a cooperative.

Soon after this change in UK law the Inclusive Growth Commission of the RSA, chaired by Bloomberg’s Stephanie Flanders, recommended the setting up of regional banks as an important way to deliver inclusive growth in the UK.

A group of innovators and RSA Fellows have spent the last few years building the concept of ‘community banks in a box’, and the RSA is now working with the CSBA to facilitate the development of a UK wide network of regional community banks.

As well as the bank I have helped found in the West of England region, Avon Mutual, we have banks already in formation in London and the South West and soon we hope in the Preston, Merseyside and Lancashire region, as well as in Wales where our bank model was a key plank of the newly elected First Ministers manifesto in which he committed to supporting and investing in starting our bank in Wales in 2019.

Community wealth building has also been taken into the heart of Westminster with Shadow Chancellor John McDonnell having launched a Community Wealth Building Unitwhich is increasingly influencing Labour Party policy. The idea of spending locally to support small business and high streets is also high on the agenda of many Conservative councils, particularly in more rural areas and our South West Mutual bank has already had investment from several Conservative Councils in Devon. It’s exciting see that there is no party political split on these issues and in the West of England we are likewise finding that our bank model appeals to both Conservative and Labour Councils as well as to Lib Dems, Greens and the Co-operative Party.

Our mission is to help redress regional inequalities, build financial inclusion, significantly increase the proportion of bank lending going to the ‘real’ economy and SMEs instead of the financial economy, build economic resilience, and bring about a renaissance of customer service, relationship banking and trust.

These banks will be full deposit-taking savings and loan retail and business banks. In that regard we will have the same functionality and feel as normal high street banks with branches, and online and mobile connectivity. But we won’t be trading and involved in the speculative ‘financialized’ economy - just the real economy of our regions. Using local savings to lend to local citizens, businesses and other institutions. Relationship banking will be key to our model’s success - unlike a distant algorithm which usually says ‘no’ our lending officers will be embedded in their communities and their needs.

Our banks will serve the everyday financial needs of our member customers - ordinary citizens, local community groups, and small and medium sized companies. We will also work closely with local authorities, universities, housing associations, credit unions, community development corporations, CDFIs, local social investment funds, revolving loan funds and others. And we aim to become a key anchor institution supporting the growth of other community wealth building institutions and focused on promoting sustainable and inclusive prosperity for our region.

We have a strong focus on relationship banking, a renaissance of high street branches, small and micro enterprise and banking the unbanked and underbanked citizen, thus significantly impacting the ‘poverty premium’ associated with not having banking facilities. We aim to rebuild trust in banking and our democratic structure means that every member, not every share, gets a vote.

Avon Mutual will provide services to approaching 1000 SME businesses and social businesses in year 1, rising to over 14,000 in year 5, creating and supporting thousands of jobs. We hope to build to 85,000 retail and 18,000 business members by year 10.

The social impact of these activities is also enhanced by the fact that these loans are spent into the real and productive economy, creating a local impact multiplier that delivers a further 76% of value to the local economy. All of this will be measured working with best-in-class advisory services and reported regularly to members and society.

We will also model the values of community wealth building by being a living wage employer, having a 10:1 pay ratio for staff and having no bonus or sales incentives encouraging cross selling and over-selling. Our democratic structure means every member gets an equal say in how the bank operates, no matter how few or many shares they own.

Community wealth building in the West of England

As I grew up and am based in the West of England I’m particularly interested in the potential for this region to become an exemplar of the sorts of initiatives mentioned above.

In addition to soon having its own regional community owned bank, there is already a huge amount of activity, enthusiasm, energy and networks of trust amongst diverse players which represent solid foundations on which to build.

A New Economy Summit I helped organise in Bristol two years ago was witness to this energy as there was standing room only, with hundreds of people spending two days exploring the potential of community wealth building in the region. And at a Finance Innovation Lab and Democracy Collaborative day long 2º City Finance Lab event in November 2018, a group of 50 people from the region and around the world got together to explore how the city of Bristol could use innovative finance mechanisms and institutions like Avon Mutual to deliver on our climate change commitments.

Bristol City’s Mayor is the first elected black Mayor in Europe and is driving forward an exciting vision for inclusive growth. Bath and North East Somerset council has an active approach to community partnership involving support for asset transfer and community energy and in places like Stroud and Gloucestershire there is a strong tradition of community wealth building and ecological awareness. Swindon also has an emerging Swindon Model inspired by community wealth building. The West of England region has a combined authority bringing the possibility of coherence across a number of authorities.

I’m hopeful that in years to come people will look to our region just as today we admire the innovations in places like Barcelona, Quebec and Emilia Romagna.

It’s truly exciting times for community wealth building here in the UK as well as in the US and elsewhere across an ever more connected world. More than ten years on from the financial crash of 2008, our revolutionary new community cooperative banks are set to shake up the banking sector and play a pivotal role in the flourishing of community wealth building across the UK. Let’s ensure that we don’t miss this exciting opportunity to transform our communities.

Please share this story with friends and join our movement. Get in touch if you would like to get involved, support or invest in Avon Mutual.

Register your interest in the Co-operative banking movement

Originally blog published here by RSA and in the US by here by Democracy Collaborative.