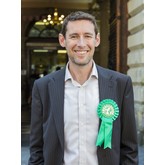 Darren is the Green Party candidate for the Bristol & Bath metro-mayoral election.

He studied mechanical engineering at Swansea University and in 1990 joined the Royal Air Force as an Engineering Officer. He returned to Bristol in 2001 to work for the Home Office as a crime and drugs manager, later promoted to Regional Manager. In 2010 Darren moved to run the Bristol Green Capital Partnership, managing the team that won the European Green Capital Award. He is now a freelance project manager in the social and environmental sector.

Darren is the Founding Directer of The Pale Blue Dot, and a former Director of the Big Green Week Community Interest Company. He is also a board member of the Bristol Community Land Trust. In his spare time, Darren is a keen surfer, cyclist, runner and photographer.