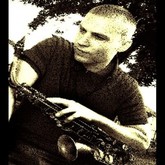 James Morton is one of the most promising saxophonists today and was recently appointed Mayoral Ambassador of Music for Bristol.

Born in Bristol in 1982 of English, Russian and Polish descent, James began to play aged 9.

He performed his first gig aged 12, and since then James has recorded and performed with some of the most prolific artists in the world including Kasabian, Pendulum, Raphael Saadiq, Fred Wesley and Pee Wee Ellis to name just a few.

James released his debut album with James Morton's Porkchop "Don't You Worry 'Bout That" to critical acclaim in 2010 and has a new album "The Kid" due for release in  early 2015.