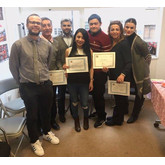 The #IWGB is a small, independent trade union, whose members are predominantly low paid migrant workers in London. A campaigning union, it has waged a number of high profile campaigns, such as with the Royal Opera House, Deliveroo, and Excel.

The #IWGB also provides representation for its members in workplace meetings such as grievances and disciplinaries, and arranges representation in the courts and at tribunals re issues such as unfair dismissal and discrimination.

Other activities include English for Speakers of Other Languages (ESOL) classes and an English-Spanish language exchange.