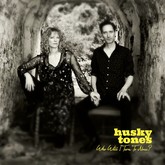 Husky Tones’ approach to the blues mirrors what they love as audience members: inventive, individual and fully aware of tradition without being a slave to it. Since the release of their critically acclaimed debut album ‘Time for a Change’ in 2015 they have been making new friends and fans performing around the UK.

Their punk blues style favours the common rawness, simplicity and emotion shared between the punk and blues genres. It is delivered live by the unique set-up of a female drummer singer Victoria Bourne and guitarist Chris Harper.

They are currently writing their second album, to be entitled ‘Who Will I Turn To Now?’ This will be recorded in Nov 2016 at Platform Studios, produced by Stuart Dixon and released in 2017. They are represented by Robmont Music and will be appearing at national festivals later this year and touring Europe in 2017.